Thoughts for the New Year

Posted on January 4, 2018 by angelolopez 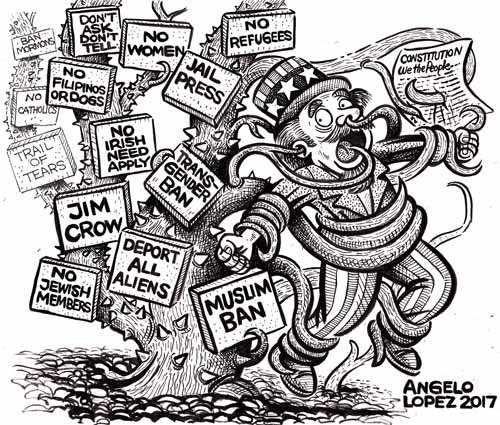 This has been a roller coaster of a year for me, both in terms of politics and in terms of my personal life. At the beginning of the year I attended a lot of protests and political rallies.  Being around like-minded people really helped pull me out of the depression I sometimes felt when I would read the latest news of Trump and his administration.  When my father had knee replacement surgery, I had to pull back from doing any political activities, as I spent more time helping my parents out.

Three issues are uppermost in my mind in 2018 when I do my political cartoons: the racism and religious bigotry of the Alt Right and its bad influence on the Republican Party; figuring out how to bridge the divide between the working class white communities that supported Trump and the minority communities that feel threatened by Trump; the horrific nature of Duterte’s policy of extrajudicial killings, which is just state sponsored murder.  I deeply dislike Trump, but in 2017 I tried to focus my cartoons more on the issues rather than personally attacking Trump.  Trump may be exploiting the great racial and cultural divisions in this country, but he didn’t create those problems.

One of the biggest challenges that I think Democrats and responsible Republicans have to face is to bridge the divide between the white working class communities in the Rust Belt and South and the minority communities found in the urban areas of the coast.  Many of these working class white communities are facing the same problems that inner city African American communities faced in the 1970s and 1980s.  As the industries that once provided middle class jobs to those communities began disappearing due to either globalization or automation, both white and black communities began exhibiting the same symptoms of despair: a widening drug problem; a lack of hope for the future; a loss of faith in education; a rise in suicide rates; a sense of isolation from the wider American society; an increase in crime.  In the same way that the economic struggles of the 1920s and 1930s led many Germans to support Hitler, a sense of economic despair and anger is making a portion of the white working class more vulnerable to the bigotry of the Alt Right.  This increase in prejudice in turn is having a devastating effect on many vulnerable minority communities.

So I think our government needs to find ways of helping both these working class white and minority communities.  Both communities have far more common interests than they have differences.  They need to see that minorities are not their enemies.  The great foe to both groups is the economic inequalities of the current system.

I also think it’s important to return to civility in political discourse. One of the things that I hate most about Trump is his reliance on personal attacks and demagogic appeals rather than sober discussion on political issues.  “Little Marco”, “Lying Ted”, “Crooked Hillary”, “Pocohantas”.  I think this reliance on personal attacks is very bad for our democratic discourse.  One of the foundations of a democratic republic is the sober discussion on political issues.  People of differing views cannot have an intelligent debate on important issues without civility.  I used to try to engage with anyone who wants to discuss politics with me. After several bad experiences though, I’ve learned that I have to pick my spots on when to engage and when not to. I’m still willing to have a dialogue with sane conservatives who are respectful of differences of opinion.  I’ve had too many bad experiences though with crazy conservatives who are just interested in a monologue where I’m just expected to listen and automatically agree with everything they say.

For the past year I’ve also focused my political cartoons on the extrajudicial killings in President Duterte’s war on drugs.  Killing people who are only suspected of a crime without giving them a chance to defend themselves is immoral.  But I feel like a lone voice in the wilderness.  Right now Duterte’s approval rating in the Philippines is in the high 70s, though the Catholic Church, various leftists groups and human rights activists are becoming more vocal in their criticisms of extrajudicial killings.

In 2017 I was so focused on politics that I didn’t do as much art as I would’ve liked.  In 2018, I will continue to go to protests and political rallies.  But I also plan on doing more paintings, web comics and children’s book ideas.  I’ve decided to self publish some of the children’s book ideas that I have on Createspace rather than continually sending them to publishers to get rejected.  If I have time, I may start doing my Jasper the Cat cartoons again.  All this depends on me having the discipline to manage my time better rather than get distracted.

I’ve wanted to be an artist all my life. Since I was a child I’ve drawn on any scrap of paper I could get a hold of. When I went to San Jose State University, I became more exposed to the works of the great fine artists and illustrators. My college paintings were heavily influenced by the humorous illustrations of Peter De Seve, an illustrator for the New Yorker magazine. I also fell under the spell of the great muralists of the 1930s, especially Thomas Hart Benton and Diego Rivera. I graduated with a degree in Illustration. Angelo Lopez has had illustrations published in Tikkun Magazine, the Palo Alto Daily News and Z Magazine. From April 2008 to May 2011, Angelo's cartoons were regularly published in the Tri-City Voice, a weekly newspaper that covers the Fremont, Hayward, Milpitas, Neward, Sunol and Union City areas in California. He did a political webcomic starring his cartoon character Jasper for the progressive blogsite Everyday Citizen. Since December 2011, Angelo does a regular weekly political cartoon for the Philippine News Today, a Filipino American newspaper based in the San Francisco Bay Area. Angelo is a member of the Sunnyvale Art Club, and the Northern California chapter of the Society of Children's Book Writers and Illustrators. During the 1990s, he was a member of the part-timer workers SEIU unit in the city of Sunnyvale. Angelo won the 2013, 2015 and 2016 and 2018 Sigma Delta Chi award for editorial cartooning for newspapers with a circulation under 100,000. He has also won the 2016 RFK Book and Journalism Award for Editorial Cartoons. Angelo won first prize for the Best of the West contest in 2016 and third prize in 2017. Angelo is married to Lisa Reeber. They enjoy taking walks, watching movies and hanging out with their nieces.
View all posts by angelolopez →
This entry was posted in Uncategorized and tagged Alt Right, Civility, Duterte, Eiditorial Cartoons, Extrajudicial Killings, Minority Communities, Philippines Today, Trump, Working Class White Communities. Bookmark the permalink.

2 Responses to Thoughts for the New Year